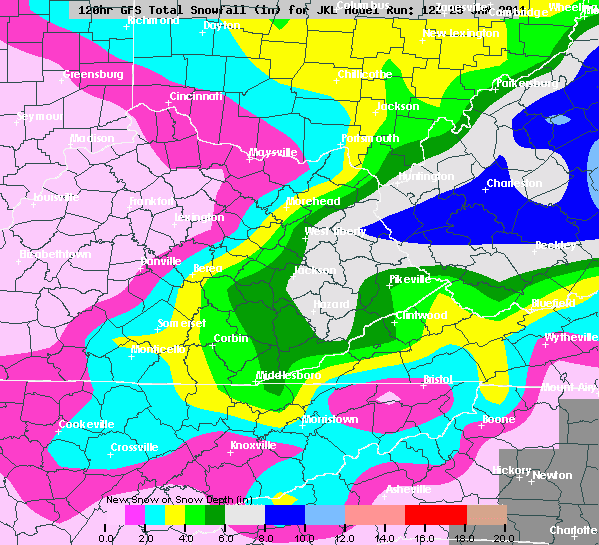 This one could hurt...

Short answer…yes.  After that, it gets a bit sketchy.

Chris Bailey says it is coming and could hold some surprises.

Bill Meck says it is coming, but is hesitant to get very specific for now.

The GFS model (pictured in the image to the left and one of the often used weather predicting models) says make sure you have some bread and milk.  One thing to not, that is a 5-day model, and could include some snows forecast to be coming later in the week.  It may not ALL be for this upcoming storm, although the 5-day for our area is not showing any more snow…so…

Even the National Weather Service in Jackson is being reluctant to put too fine a point on this storm, saying that a degree or two in one direction or another could make all the difference in the world right now for snow totals.

What does seem evident is that it IS going to snow, and here in Morgan County, we should get a decent amount.  Will that be 2 inches, or will it be 10??  Right now, it truly looks like it could just as easily be one as it could be the other…how’s that for frustrating?? 🙂

As always, you can check out the Weather page for radar loops (be sure to refresh the page) and Chris Bailey weather blog updates.

Also, head over to our post about the previous snowstorm and what YOU do to get prepared for such an event.